In this article, we will make a deep comparison of DJI FPV vs DJI Air 2S. DJI’s first all-in-one, ready-to-fly, first-person POV product is the FPV drone. The drone FPV is not like most consumer drones in the market right now. You pilot this DJI drone while wearing DJI FPV goggles rather than by flying it as a line-of-sight or using your iPhone as a display screen.

On the other hand, DJI Air 2S is the company’s newest addition to the Air series, and it is undoubtedly one of the most powerful photography drones till now.

DJI decided to incorporate an efficient camera on its FPV drone, a 4K camera capable of capturing 60 frames per second. Other frame rates are available, So you can easily choose between them using the DJI FPV goggles.

However, the DJI FPV drone lacks several features, as seen in other photography drones. Compared to Mavic’s Hasselblad system, it can’t capture HDR, and the 4K footage is not as elaborate.

The DJI Air 2S is a powerful and adaptable photography drone, as it can shoot in 5.4K resolution when it comes to footage quality. It can also capture with 4K 60 and with 5.4K up to 30 frames per second.

DJI FPV has extensive image control than some Mavic drones so that you can switch from standard to D-Cinelike for a ‘log-like image. On top of H.264 compression, the more efficient and higher-quality H.265 recording is offered.

It records at 120Mbps at H.265, which is a rather good feature of this photography drone. FPV drones allow you to configure camera parameters like ISO, Shutter speed, and so on, but it has a fixed aperture.

The Air 2S has an HLG recording mode for high-dynamic-range shooting and D-Log mode, allowing post-production usage of the sensor’s full latitude. With this drone, you can also choose from three video color profiles and record in H264 or H265 based on your preferences for visual details and storage capacity.

Which one is better when we compare DJI FPV vs DJI Air 2S regarding battery life. The battery in the DJI FPV drone is relatively large, which aids in the aircraft’s balance. The DJI’s intelligent flight batteries of 200 mAh can provide up to 20 minutes of flight time, SO that is a significant improvement over ordinary FPV drones.

Want to know about the best drones for carrying weight?

The third version of OcuSync technology of DJI drones is used to power the drone FPV monitoring system. SO it has a maximum transmission range of 10km (unobstructed, interference-free, and FCC-compliant in the United States) and 6km (in Europe for CE-compliant). 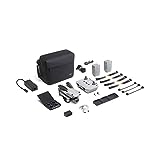 The DJI Air 2S encompasses the O3 upgraded transmission system with the most recent OcuSync technology. So the antennas in the drone have been doubled to facilitate omnidirectional signal coverage. This provides a sensitive and reliable signal even when the drone is flying above or ahead.

According to DJI, even in places with a considerable number of signals, the maximum distance for a steady feed is 8km (CE) or 12km (FCC).

The remote controller in FPV drone DJI is similar to the Mavic series but without the phone holder, replaced by DJI FPV goggles. With the remote controller, you can fly in normal, sports, or manual modes. The new motion control, on the other hand, is far more enticing. This is an optional add-on for DJI FPV drones, but it provides an entirely new and undisturbed way to operate a drone.

It contains a gyroscope to assess its position in the space and can be utilized in normal and sports modes. If you move it to the left, the FPV drone will turn left; if you shift it to the right, the DJI FPV will turn right.

The Air 2S uses the same remote controller that debuted with Mini 2 and is also found on Air 2 and DJI FPV drones. The Motion Controller with the DJI FPV drone and the DJI goggles FPV does not work with Air 2S.

The DJI FPV drone has four obstacle avoidance sensors, two in front and two on the bottom, equipped with an auxiliary light that aids precise movement in low-light conditions. These sensors are only functional when the drone is in ‘N’ or Normal mode.

This mode is ideal for those who are flying a DJI FPV for the first time. Obstacle avoidance sensors are disabled in the ‘S’ or sport mode. The DJI FPV can travel over 97 km/h and can execute limited pitches and rolls. The drone experts can use the ‘M’ or manual mode.

The DJI Air 2s can sense its surroundings in four directions: up, down, forward, and backward. It also possesses upgraded Advanced Pilot Assistance Systems (APAS 4.0), which allows this drone to avoid obstacles in more complicated situations proactively and at higher speeds.

Do you think, DJI Mavic Air 2s is better than DJI FPV? Is DJI FPV worth buying with goggles?

First off DJI FPV came out with DJI FPV. DJI FPV is DJI’s latest version of their first-person view quadcopter. DJI invented the phantom and made it better to DJI 2, DJI 3, DJI 4.

The DJI FPV is a very popular choice for beginners that are looking into buying their first drone or beginner racer because it’s not too expensive at $319 but still has all the features that people are looking for in drones these days.

The Air hogs two is one of the cheapest drones under 100 dollars. Yes, you heard it right! It costs only $59.99 which is so cheap yet it has so much to offer.

Table of Contents The Pro and cons of owning a DJI SparkPros:Con’s:Battery LifeMaverick’s conclusion about Spark:5 FAQ about Spark Vs Mavic Mini Drone DJI SPARK FLAMABILITY Due to its smaller size, the DJI Spark is much more flammable compared to the Mavic. Flammability and fire safety aside, there are a few other things that separate…

There are a few big changes with the DJI FPV Goggles V2. The first is that they now come with built-in antennas, which should give you a better signal and picture quality. They’ve also been designed to be more comfortable, with a wider headband and thicker cushioning. The V2s also comes with a new charging…

Table of Contents Are all Drones the Same?How to Increase the Lifespan of Your DroneHow Do DJI Drones Compare?How long do DJI drones last?What are the different types of DJI drones?Are DJI drones difficult to fly?How much do DJI drones cost?What is the best drone brand? DJI drones are some of the most popular on…